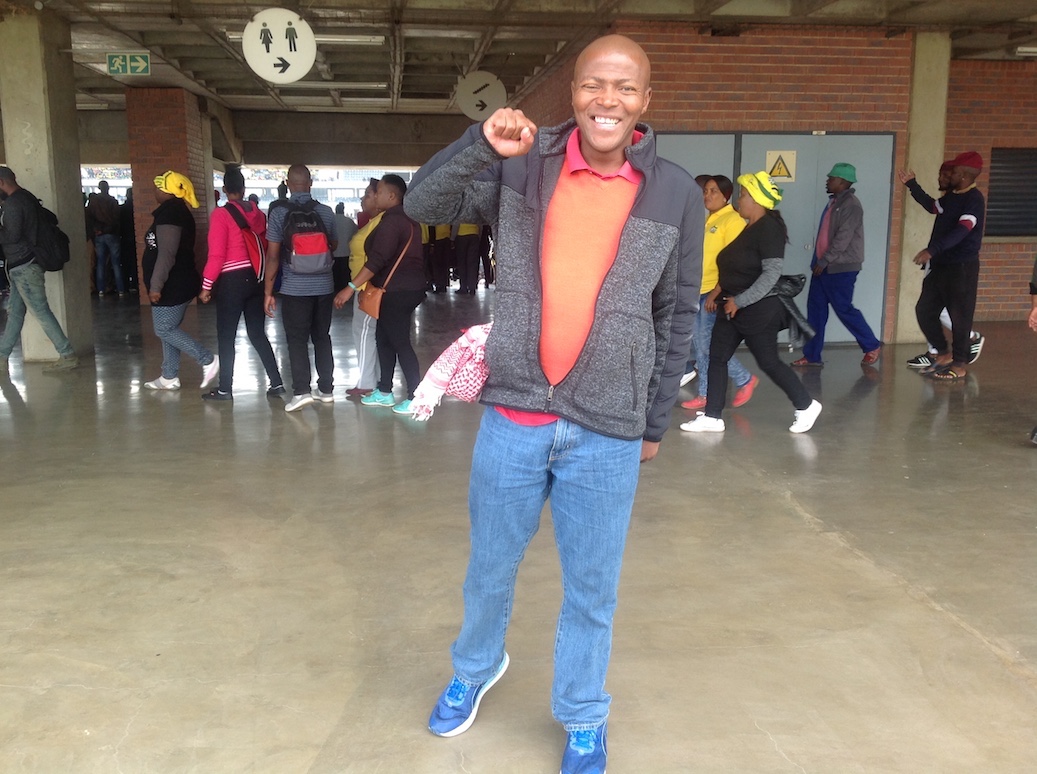 On April 2, 2018, Easter Monday, South Africa received the sad news that Ms. Winnie Madikizela-Mandela passed away.  A ten-day mourning period was declared by the government and her burial was on April 14. I attended one of the many memorial services held in her honor in Orlando stadium in Soweto on April 11.  (Among the various memorial services held for the late Ms. Winnie Madikizela- Mandela was one held by the ANC Women’s League at the historic Regina Mundi Catholic Church in Soweto, run by the Missionary Oblates of Mary Immaculate.) Here are my thoughts on this experience and Ms. Mandela’s legacy.

On April 11 I attended Winnie Madikizela- Mandela’s memorial service held in Orlando stadium in the famed township of Soweto outside of Johannesburg. I entered the stadium and walked through the Orlando West/Phefeni viewing area. From this area I could see the Ms. Madikizela-Mandela’s house and the famous Vilakazi street; also Archbishop Tutu’s house, as well as the original home of Nelson and Winnie Mandela.  What really caught my attention though was the sight of the huge Hector Peterson Museum, which tells the story of the Soweto Uprisings, especially the 1976 student riots. These uprisings were by black school children standing up against the might of the apartheid government and protesting an educational policy that would allow their already inferior education to be further lowered by being taught in Afrikaans; a language many were not familiar with. Many of the young people who participated in these uprisings perished from police bullets while others died in police detention.

This led me to think of the present South Africa that I live in, the thought that the very spot and inch of land on which I stood was won by the blood of countless people who fought, so that all inches and spots of this country are free. I thought of the spots and inches of the country which are still not free. Just a few weeks ago a White South African woman was sentenced to three years in jail for hurling racial slurs at a Black policeman who was trying to help her after she was the victim of a crime.

I was led to think of the spots and inches of land in this country that are not free especially for the women and children of our land. I remember stories of how the young Winnie, or Nomzamo as she is known in her home village, stood up against forces and forms of dominance against children and females by challenging boys in the traditional male game of stick fighting. This is the story of a woman who knew her self-worth and dignity and was prepared to challenge whatever stood in her path.  A social worker by profession, she used every opportunity granted to fight for the voiceless and meek.

I attended the Winnie Madikizela- Mandela’s memorial service today, not really to listen to the long speeches but to be in the presence of the large, colorful and loud crowd that was anticipated. Indeed, the crowd did not disappoint – it was large, it was colourful with people clad in different African-style attire and African National Congress (ANC) regalia of bright yellow t-shirts, and it was loud almost chaotic with songs sprouting out from different corners of the stadium, especially when a new group entered the stadium greeting the crowds with their special song and dance.

Interesting for me was the young school-age children, singing their brand of revolutionary songs. I thought of how a few yards away (Hector Peterson Museum), a few years ago, the sight of school children chanting was an invitation for police to attack, not just with tear gas and rubber bullets but also live ammunition. I thought of this present South Africa, where school children can sing freely as children should do; this is the South Africa which Winnie Madikizela- Mandela and countless others like her sacrificed their lives, their homes, families, innocence, and dare I say morality.

In the stadium, while the speeches were going on and the music was getting louder, I thought of the present South Africa and then chanted along, responding to the shouts and slogans of Amandla!! (Power to the people!!) and Viva Winnie Viva; I found myself screaming back, to shouts of Viva ANC Viva!! For although this was a national memorial service, it was still an ANC event. I shouted back Viva ANC VIVA!! I did so without shame for indeed in these days many are not proud to be associated with the ANC. As the speeches went on and the singing got louder, I thought of the ANC of old and felt nostalgia for the days of the idealistic, strong, revolutionary and almost naïve ANC of old. The ANC of selfless leaders ready to die, kill and be killed not for the ANC or members of the ANC, but for every inch of land in this country and for every suffering person of this land. Where has that ANC gone? Has it been swallowed by the struggle for self- enrichment? Has that ANC lost its path as it fights a new struggle to stay in power without empowering those who placed it there? Where has our ANC gone? The ANC which made us dream of a South Africa that would be free for all (men, women and children); the ANC, which taught us to honor our dignity, not as poor people, not as Black people, but as human beings.

As the speeches went on and the singing got louder I thought of the present ANC and was inspired to think that the ANC of old, which has morphed into a big uncaring institution, but remembered that this is the ANC which Ms. Winnie Madikizela Mandela challenged bitterly to remember its past, its mission its identity as a party for human dignity.

I attended the Winnie Madikizela- Mandela memorial service today, not to listen to the speeches but to honor a village girl who became the mother of a nation. As the speeches went on and the singing got louder there was a voice which refused to be drowned. In the stadium, there were large screens beaming the footage of dignitaries on the stage and from time to time showed photos from the life and times of Winnie Madikizela- Mandela. Each time this happened from all corners where the big screen was visible, voices which refused to be silenced remarked: “This was a beautiful woman”, many people said this and commented on her beauty. Indeed, she was a beautiful woman and she wanted to be beautiful even in her old age; but maybe her beauty was also the hiding place for the deep ugly scars, of rejection, isolation, torture, vilification and many other ugly skeletons as one of the most visible victims of apartheid.

I attended Winnie Madikizela Mandela’s memorial service not to listen to the speeches, but to honor a woman who, though she was the embodiment of struggle, not just the struggle for the country but also of her own dignity; a woman who was tortured physically and emotionally and morphed to be viewed not as the wife of Nelson Mandela, but was for many years viewed as a heartless, cold and cruel woman. A woman who even when the country was free was herself not free, because she dared stand up against the ANC and even challenged the giant and ‘saint’ Nelson Mandela. For that, she paid the price of isolation and rejection by her own colleagues and friends in the ANC.

I attended Winnie Madikizela Mandela’s memorial service not to listen to the speeches but to sing, to dance a bit to the struggle songs because South Africa is still not free; the struggle still has to be waged for the dignity of the poor who cannot get out of the poverty trap. To remind myself that even when they have no voice the poor still sing and by singing they challenge all of us with a voice to speak up for them; to remind myself that although they have no means of transport the poor still dance and by dancing challenge us to walk their path and in so doing, in talking with them and walking their path we may realise that the struggle is still me very much alive and because there are spots and inches of this beautiful country that are not free. ALUTA CONTINUA, AMANDLA!!!

By Fr. Zweli Mlotshwa, OMI. He currently works with the Archdiocese of Johannesburg, South Africa. He previously worked in Zimbabwe as a missionary.